Under the clever direction of multi-award winner, Ramiro Daniel, and with the participation of award-winning actors Juan Pablo Hernandez, Juan Carlos Ramirez, Cesar Trujillo, and Cesar Bravo, “Princesas Desesperadas” is a fast-paced comedy that tells the story of four Disney Princesses who get together fifteen years after their “happily ever after.” None of them are happy that they are not yet queens, and the sharp vaudeville-esque comedy quickly puts the audience in a voyeuristic situation as the characters, one by one, become unraveled as they peel off the tragedy of their lives piece by piece, drawing the spectators into a very private conversation amongst women; a conversation not meant to be heard by anyone else. “Princesas Desesperadas” – in Spanish – began in Puerto Vallarta in April 2014, and has enjoyed overwhelming success ever since, playing to thousands of people and receiving accolades from the media and the public. Pero Bravo’s co-founder Cesar Bravo says “those who have seen this joyful production have become ardent – very ardent fans, with some having seen the production over seven times!” 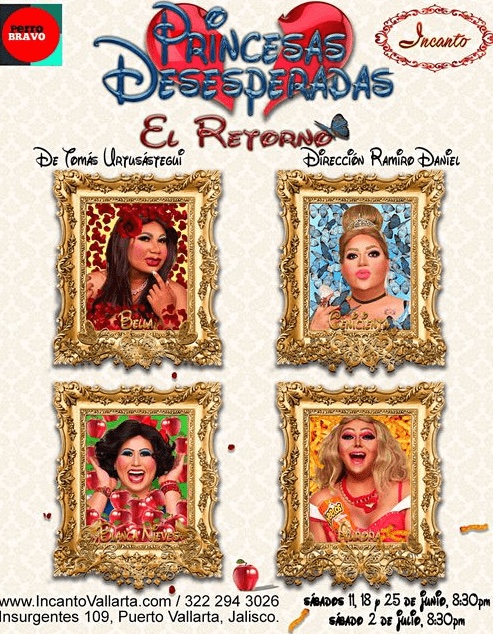